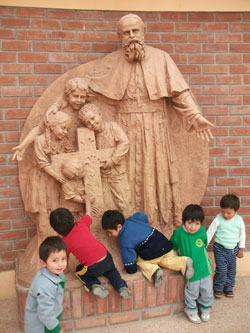 Daniel Comboni was born in 1831 to a poor family, the fourth of eight children.  His father was a farmer in the village of Limone Sul Garda (Northern Italy).

An excellent student, Daniel entered the Institute founded by Father Nicola Mazza in Verona.  During years of study and his witnessing of returning missionaries, he was entranced by the missions.  He discovered his calling to consacrate his life to the poorest and most abandoned in his dear Africa.

An energetic and determined entrepreneur, Comboni spent the rest of his life between Africa and Europe, involving everyone with whom he came into contact.
Comboni received the inspiration for the writing of his «Plan for the Regeneration of Africa» during a difficult time in history for missionary activity.  Missionary efforts often yielded minimal fruit and were frequently hindered by illness and death among the missionaries.  Comboni realized that it would be necessary to save Africa through Africa and that the Africans would need to become the major players in their own development and evangelization of their people.

He sought locations where formation and the exchange of experiences would be possible between the European missionaries and the African people.  Yet he emphasized that the Africans should take the lead with respect to taking on responsibilities in the missions, such as the schools, hospitals, professional workshops, etc.

Comboni engaged many people in his dream, never tiring of visiting and writing letters to encourage participation for his beloved Africa.  As he travelled extensively throughout Europe, he implored all who could help him to collect funds, rescue slaves, battle slavery, and consider leaving on mission (priests, religious and lay persons).

They worked together as a community for the good of the mission, each according to his or her capacity, reminiscent of the Cenacle of the Apostles.

As the Comboni Family, we strive to relive this example by our giving a thousand lives for the mission.

We invite you to watch a short video that summarizes his life.

If you are interested to gain a deeper understanding of Daniel Comboni’s personality and charism, you are invited to enter into the Formation Tab where you will explore further topics related to mission, such as culture, development, etc.