The CLM group in Peru started on 9th November 1996 with Fr. Fascina Romeo Ballan as the first MCCJ assessor of the movement.

The CLM in Peru is a group of people from different parts of the world, living the charism of St. Daniel Comboni. Currently we are working in the city of Trujillo (El Porvenir): two CLM from USA and Peruvians CLM, in the Diocese of Huánuco, Parish of Baños: Rondos (one Mexican CLM) and Huarin (is completing his time a Peruvian CLM and about to take the relay 2 Peruvian CLM), Lima (pastoral in Pamplona Alta in San Juan de Miraflores) and Arequipa (2 Spanish couples with their children).

The actual coordinating group is formed by three CLM elected by the Assembly for the period of 2013-2014. Their members are: Corina Pacheco Tello (coordinator), Rosa Bravo Pio (Treasurer), Fisher S. Ayquipa Poma (Secretary) and Fr. Sergio Agustoni (MCCJ) as our assessor.

In the last continental assembly (Maia, Portugal, November-December 2012) Peru and Mozambique were assumed as a priority to set international communities. We have proposed the community in Rondos (Huanuco - Peru) for that experience, mainly because it meets the conditions for a good project (house, pastoral evangelization, human development) and because there is a large CLM presence from different countries in the area. Now in Rondos is a Mexican CLM and we are expecting a Brazilian one.

Meet the CLM in Peru 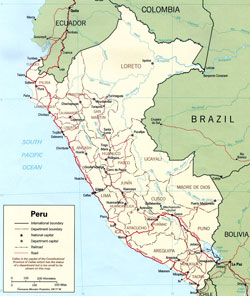 Languages: Spanish (official), quechua, aimara and other native languages in the jungle.